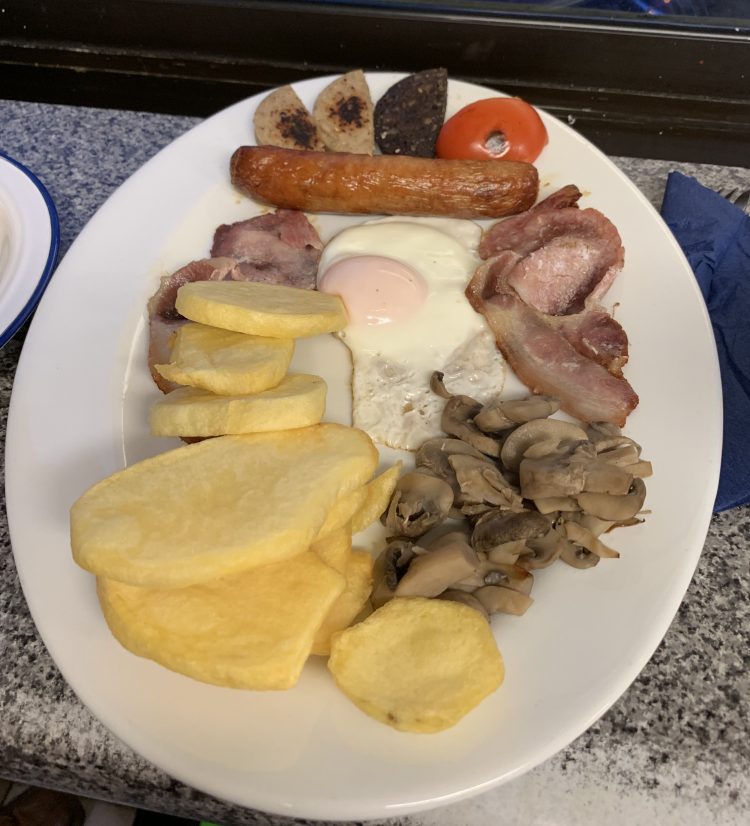 Brendan’s Café is one of those places that appears on ‘must visit before they disappear’ lists. It’s a ‘hidden gem’, an ‘institution’, a bit of ‘hidden Dublin’. I would wager a fair amount that it’s not one of the most visited ‘must visit’ places however. At least by the people who read those sort of lists.

Brendan’s Café is in an area of town that wouldn’t be considered the most attractive. Mary’s Lane is on the other side of Capel Street from Henry Street and the Jervis Shopping Centre, an area of roofless buildings, derelict sites, local authority housing, schools behind imposing gates and high grey walls, cobblestones (setts, to be accurate) and reversing forklifts. Yes, forklifts. This is the area where your tomatoes, your spuds, your cabbages and sprouts come from. It’s where the fruit and vegetable market is and from very early in the morning, it’s a hive of commercial activity, lights and noise.

Brendan’s is there, from 6am, to feed the fruit and vegetable workers and others with breakfasts that mean business. And they do mean business.

My companion this morning was Philip, an old college pal.

There aren’t that many people I know who would say yes to an invitation to meet in mid-winter in the centre of town at 8am for a fry up. Philip accepted with alacrity, for which I was glad because I often feel that breakfast with company is a lovely way to start the day. And Philip is, of course, good company.

Actually, this is an interesting area of the city. For woodworkers, carvers and turners, there’s R J Gough, a trove of tools, accessories and valuable advice.

For teachers and artists, not too far away, there is K & M Evans, where you can buy paints, brushes, lino printing materials, modelling clay and the like. And if you are looking for modern functional and attractive pottery, there is no finer place than Arran Street East.

There is also The Complex, a little known theatre and arts space.

During the Dublin Fringe some years ago, I attended the most extraordinary production there, called ‘Reassembled, Slightly Askew‘. The audience (limited to about 12 people) were checked in by a man in hospital scrubs, and ushered into what looked like a hospital ward. Each of us was directed to lie on a bed and given headphones. What followed was a most immersive audio experience, a first person chronicle of the onset and development of a brain infection. Most affecting, alarming at times, and deeply moving.

Back to Brendan’s. It was a cold and windy morning and Brendan’s was like a sanctuary from the weather, warm and inviting. We were greeted warmly too and it was suggested that we might like to sit at a table in the next room, but we opted to sit at a counter at the centre of the action so to speak.

The menu is simple, displayed behind the main counter and on a blackboard.

Breakfasts, burger, lasagne and a variety of rolls, wraps and sandwiches, and a variety of hot and cold beverages. Everything under a tenner. We made our choices and sat facing the large window at the front.

Brendan’s is capacious, maybe catering for 50 odd. The section we were in holds maybe 15. It’s warm, bright and smells of fresh breakfast. This is a functional cafe, designed for feeding people, not for aesthetic pleasure. Not criticising, you understand, just describing. The only artefact of note is a framed display of pre-decimalisation notes. It’s good to be reminded of how huge they were and how iconic the portrait of Hazel Lavery became.

Our beverages (coffee for me, tea for Philip) arrived promptly followed not too long afterwards by our breakfasts and bottles of Chef brown sauce and tomato ketchup.

Philip is currently a non-wheat, non-meat eater and so his breakfast comprised scrambled eggs, mushrooms, tomatoes and potatoes.

Mine was the healthy option – the large breakfast – comprising a fried egg, bacon, sausage, black and white pudding, potatoes, mushrooms and, on the side, toast.

Let me tell you about the toast. This is Brennans white sliced batch loaf,

toasted and buttered behind the counter. I’ve never experienced pre-buttered toast before but, to my surprise, anyone I’ve told about this said that it’s a great idea: it saves on cutlery, there’s no faffing around with foil wrapped pats of butter or fiddly butter bowls. It just there, on your plate. Ready to be eaten.

The food was brought to us, presented pleasantly on decently sized white plates and we tucked in. We were chatting, as we do, about everything from the Boer War to Christmas, via funerals, books, films and music. The food was good. Filling, obviously and cooked by people who know what they are doing and do it well. We didn’t rush. We were the only people in the place at the start but there were several others there by the time we left. Regulars, I’d say, by the way they were greeted.

We left, shortly after 9 and parted outside the market, satisfied and set up for the day. The bill came to €16. That to me, for what we had, both in terms of food, comfort and atmosphere, was great value. Do visit. And go the whole hog.