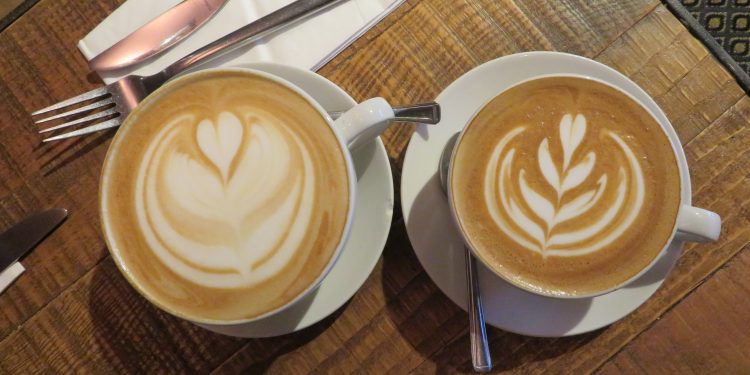 The young lad used to do karate in the Hombu Dojo in Ranelagh so I got to know what I suppose you might call this inner suburban village quite well over the years. It’s surrounded by expensive private housing so it’s a place where maybe customers have looser wallets than in some other parts of the city. So I thought it might be an interesting location in which to eat breakfast.

Ranelagh has its long standing institutions such as McSorley’s and Smyth’s pubs, Redmond’s Off Licence, a Supervalu that used to be Superquinn, and Gammel’s bakery. And then places that must be close to becoming Ranelagh institutions such as Mario’s and TriBeCa and Michie Sushi. At the next level are places like the Butcher’s Grill and Cinnamon. I would have added Hobart’s somewhere in this list but it recently closed and has been replaced by a place called Scoff, possibly a future breakfast blog subject.

My breakfast companion was Christine …

… and I chose Cinnamon because I’ve passed it so many times both on foot and in a car but I’ve never set foot in the place. It’s pink exterior and dark but inviting interior is eye-catching however, so I was delighted when I found out it did breakfast.

We arrived at about 9.30am and stood beside the ‘Please Wait Here to be Seated’ sign. And we waited. The place wasn’t busy but we were left waiting for what seemed to be a long time before somebody came, gave us menus and showed us to a table. Subsequently, we noticed that other patrons, who seemed to be in the know (or just had brassier necks), grabbed menus at the door and made their way to tables of their choosing. Well, fine, but why have the sign inside the door?

Cinnamon is a fully fledged licenced restaurant that serves food all day, from 8am (9am on Saturdays and Sundays) till 10pm. It has another branch in Monkstown.

The breakfast menu carries a good range of food, including pastries, cereals, eggs, fresh fruit salad, pancakes and so on. The menu is laminated so it didn’t photograph well (see below). You can enlarge it if you want but here’s a link to the version on their website (you’ll need to click on Breakfast/Brunch and scroll down a bit).

While we waited for our food, we took a look around. Cinnamon is an attractive place, with muted lighting, hard flooring, a lot of wood, shelves lined with wine bottles and decent space between the tables. When we got there, there were about 8 or 9 customers but it gradually filled up and, by the time we left, the breakfasters had swelled to about 30 or so.

The music was, we decided, kind of funky lounge, but it was a bit loud. Most of the customers were in twos and, by the looks of it, came to have breakfast and a chat, or to conduct some business. In other words, it’s not the sort of place that individuals pop into on their way in to work. With the volume of the music, you’d struggle to chat in your indoor voice to be honest.

Followed shortly by our breakfasts. Christine’s croissant looked substantial stuffed with a large slice of bacon and accompanied by a little bowl of chutney. The plate looks very brown and a little bare though. A small garnish of dressed leaves or even a pea shoot or two would have made it look a little brighter, and more attractive and inviting.

I know it’s a thing but I don’t think I’ve had avocado on toast for breakfast before. Not in a restaurant anyway. I wasn’t sure what a smashed one would look like but it just looked like a very green paté. The poached eggs looked good and were scattered with chilli flakes. Again, a little plate dressing might have added to the visuals, and made it look less like something I might have rustled up at home.

Christine enjoyed hers. It was as expected, filling and tasty. I cut open one of the eggs to see how it was cooked, and it oozed pleasantly.

The eggs tasted a little vinegary but they were, indeed, cooked nicely. The avocado on toast was fine. It was a filling and satisfying breakfast. And the coffees were good.

We chatted for a while and went to pay. There’s a sign at the till exhorting one to know one’s table number. I’d forgotten mine so I had to run back and find it.

The bill came to €28.80. I don’t know. I think that’s expensive for breakfast. I understand about restaurant costs and rent and other overheads and all that but still. It just seemed a bit steep for a breakfast that was nice but nothing particularly special.

We lingered for a while in the foyer which doubles as a local community/business noticeboard. By far the greatest number of notices were advertising some form of activity designed to counteract the stresses of modern life: mindfulness, yoga, psychotherapy. Huge numbers of them.

And down the road a bit was this …

… commemorating local girl made good, Maureen O’Hara (Christine knew she was from Ranelagh. I didn’t). These are part of the Dublin Canvas project, an initiative designed to bring a bit of colour and art into our lives by asking artists and illustrators to decorate traffic light junction boxes throughout the city and suburbs. I think that’s a great idea.

This is my favourite illustrator Fuchsia Macaree weaving her magic in South Richmond Street.

And here is her magic, woven.