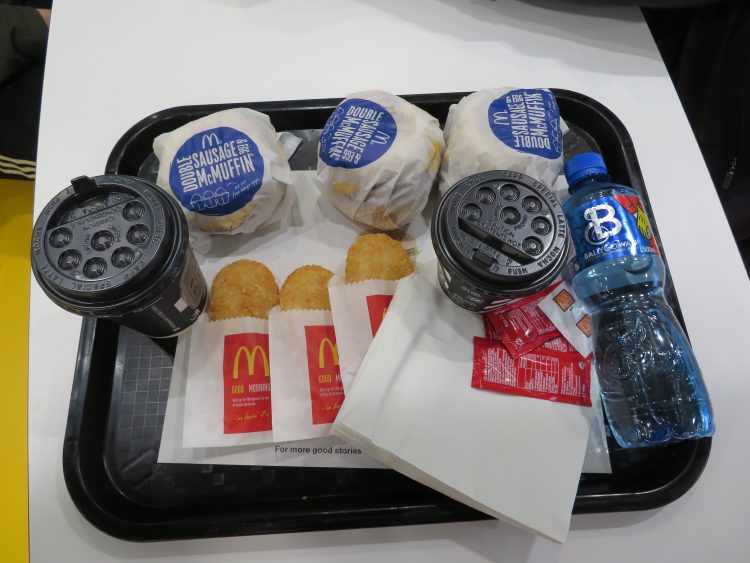 Don’t judge me till you’ve tried it. McDonald’s Double Sausage and Egg McMuffin is a wondrous creation. Junk food at its absolute best.

For this episode I was joined by the OH, Christine, and the younger lad, Edward.

For the younger lad and me, journeying to a McDonalds for a DS&EMcM meal has become an annual pilgrimage, started when he was active in karate some years ago. The dojo he attended, the Hombu Dojo in Ranelagh, used to hold a week of Kangeiko, or winter training, each year. Meeting at 7am, this comprised a jog around the streets of Ranelagh followed by about 40 minutes of karate training. We would pick up breakfast then on the way into school, alternating between Insomnia and McDonalds in Rathmines.

This time, we visited McDonalds in Blackrock. It’s located in the Frascati Centre which is undergoing a massive facelift.

McDs has been shifted from the left to the right and, whatever you think about these places, this one is sparkly, new, clean and bright.

It’s got your ordering terminals if you don’t want to talk to anyone.

It’s got a table of touch screens if you come in with some kids who you don’t want to talk to. (I wouldn’t have thought to write that if I hadn’t seen it happen.)

It’s even got newspapers and while I snapped away, my companions caught up on yesterday’s news and did crosswords.

But what this McDonalds has that I’ve never come across in any other McDonalds is a chatty, friendly, (and I say this with the greatest of respect) older woman who exudes warmth, and brings your food to you if you haven’t got the wherewithal early in the morning to stand for a few minutes and wait. I’m kicking myself that I didn’t ask her for her name because this server really made this visit a bit special. So special that I’m going to write to McDonalds and tell them.

We all ordered a Double Sausage and Egg McMuffin Meal, me with a flat white, Chris with a latte and Ed with water. The DS&EMcM Meal is the DS&EMcM with a hash brown and a drink. Oh, and ketchup.

McDonalds coffee used to taste like I don’t know what, but it wasn’t coffee anyway. Now McDonalds does pretty good coffee. I suppose a mark of its new confidence in its coffee is that one of its latest advertisements is based on its coffee offering. I enjoyed my flat white anyway.

The hash brown can be the joker in the pack.

It can taste greasy, rancid or like soggy cardboard, depending on how it’s cooked, the age of the oil it’s cooked in and how long it’s been hanging around waiting for someone to order it. To be fair, this one was fine. It was crispy but this thing always needs ketchup to give it any semblance of flavour.

The reason why we came, however, was to feast on the DS&EMcM, a creation fashioned from a bun, an egg disk, two sausage patties and a slice of plastic cheese.

It shouldn’t taste good. Nothing this artificial should taste good. BUT IT DOES. It’s salty, has more than its fair share of saturated fat, probably far too much sugar; it has an egg disk for heaven’s sake but, oh my goodness, I love it. I wouldn’t eat one every day but, once in a while, it is what I need.

I’ve said this before, and I’m sure I’ll say it again: the DS&EMcM is close to the top of my list of meals to consider if I ever found my self on death row, offered my final meal.

McDonalds is not a hangy around place, as I’m sure anyone reading this will appreciate, so we didn’t hang around.