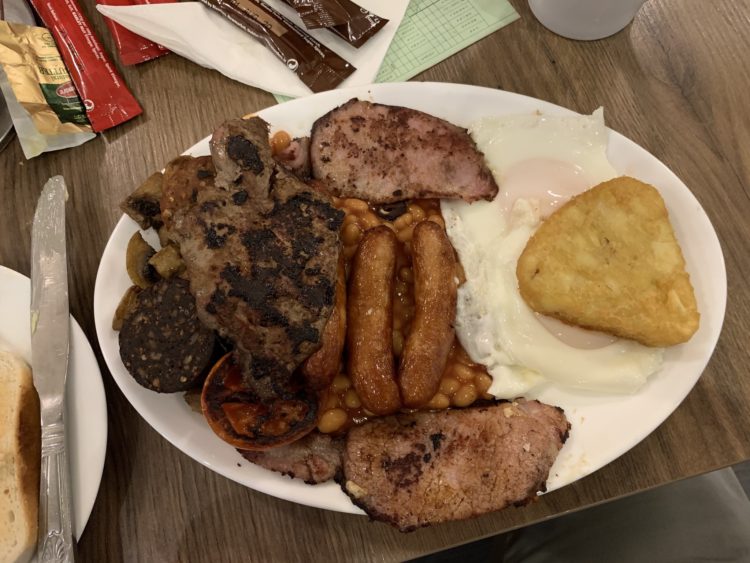 This venerable institution in Sundrive has almost legendary status and quite the fan base. According to its Facebook page, it has over 3500 followers, and I couldn’t find a negative comment on its review page.

Sundrive is not a pretty place. Dominated by SuperValu …

… it’s a hodge podge of buildings of various vintages and, like Kenilworth close by, a consequence of the poor planning laws governing the suburban built environment.

When we lived off Clanbrassil Street in the 1980s, what was then Superquinn (and now SuperValu) was our nearest supermarket, so we became familiar with the area, or at least the car park. We also used to get our Chinese take-aways from the Shirley House just up the road.

Matt the Rashers is just opposite Supervalu, at a bus stop serviced by the meandering and infrequent number 18 bus. While we were there, a few people hopped off the bus and came straight into the restaurant.

It seems small and the eating area is square, but it has seats for just under 40 patrons with another 4 outside under the grey canopy you can see above. We (the younger lad and I) arrived at 7.30am (its opening hours are 7-3) and, at that time only one other table was occupied although, again according to its Facebook page, it’s busiest between 9 and 1. As we arrived and as I was lining up the young lad and the phone to take this photo …

… a man exited and remarked that ‘everybody wants to get a photo of this place’.

We chose a table and were welcomed warmly by a server.

We both opted for Matt’s Famous Irish Breakfast, with toast and coffee. The young lad opted for an extra rasher instead of the liver. I love offal so I stuck with the ingredients as listed. And what a list! 2 rashers, 3 sausages, 2 fried eggs, 1 slice of black pudding, 1 slice of white pudding, a hashbrown, half a tomato, mushrooms, baked beans and a generous slice of lambs liver. Whew.

Our coffee came quickly, followed by thick slices of toasted white bread and pats of butter.

We didn’t have long to wait before we received our oval plates heaped with the items listed above.

You’d need to be hungry to finish this mountain of food. Everything tasted as it should and catering tubes of ketchup and brown sauce were supplied on request. Coffee refills were offered too. Service was warm and friendly.

We took our time, chatting and eating. We weren’t in a rush. While we ate, a few people came in for take-away items (breakfast baguettes by the look of the wrappings) and, by the time we were leaving, the place was starting to fill up.

This was a fine breakfast. Not one you’d want necessarily to eat everyday. That being said, there was nothing greasy about it. Nor was there the off-putting after-taste of old oil that you sometimes get from similar breakfasts elsewhere. The plaudits on the Facebook review page and on other review sites are well-deserved, many mentioning the functional quality of the breakfasts as a cure for, as one reviewer termed it, ‘that unwell feeling after the previous night’. ‘Best breakfast in Dublin’ was also a frequent phrase.

Matt’s Famous Irish Breakfast is €11 which is great value. If you ate it a little later than we did, you really wouldn’t need to eat again for the day.

Go. Try it out for yourself.