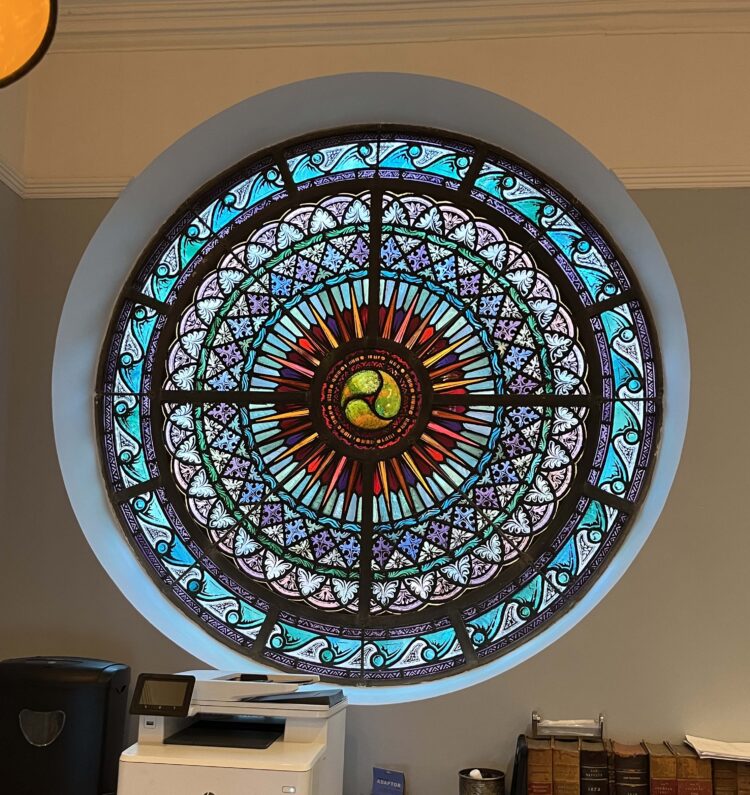 This was not my first Wetherspoons breakfast, but more of that later.

Keavan’s Port hotel on Upper Camden Street opened in August 2021, in a row of eight Georgian houses at the top of the street that had been in various states of dereliction for decades. In those houses in the past were located a convent and a stained glass works, the combination of which gave rise to this beautiful thing, now located behind the reception desk.

J D Wetherspoons has spent over €30 million on creating this 89-room hotel, restaurant and pub, between the purchase price and the cost of renovations. And it shows. It’s really quite something inside, with multiple references to the history of the buildings and of Dublin, and to Saint Kevin (yes, the Glendalough bloke), whose name was attached to this ancient thoroughfare into the city. For a more detailed history of the premises, have a look at this posting by the Rev Patrick Comerford.

My sister-in-law told me today that ‘Spoons’, as the pubs are termed by young people, does this regularly: takes old buildings and breathes new life into them through renovation. And so, although I am sure I’m not alone in thinking that J D Wetherspoons’ founder and boss, Tim Martin, is a self-serving hypocritical arsehole for his inconsistent positions on Brexit, tariffs and UK immigration policy, and allegedly exploitative employment practices, I have reason to be grateful to his company for making this previously sad stretch of a favoured street into something attractive and worthwhile.

My own attachment to the street stems from my maternal grandmother, for whom it was a main shopping street; from having lived not too far from it in the 1980s and early 1990s; from working just off it in Montague Street around the same time; and from starring in an award winning film in the 1970s, the opening scene of which was shot literally across the road from where Keavan’s Port is now located.

Like all Dublin streets, Camden Street has undergone significant change over the years but it, and its extension townwards – Wexford Street, have a character all of their own, and a range of interesting shops, pubs and restaurants.

Today, knowing that I was going to stuff my face with a large breakfast, I decided to cycle along the canal from Inchicore …

… past the canal end of Cathal Brugha barracks (which is huge), over La Touche Bridge into South Richmond Street, past the site of the famous (for music-loving Dubliners of my age) Caroline Records, through Kelly’s Corner, and into Camden Street. A really pleasant and interesting Sunday morning cycle.

Keavan’s Port serves breakfast from 7 am, seven days a week and I got there at about 7.45. The eating and drinking area is vast but at that time of day, blissfully empty (and, equally blissfully, free of musak). I was greeted warmly by a staff member.

In Wetherspoons, the preferred means of ordering food and drink is via a phone app. I had taken the precaution of downloading this a few days ago in anticipation of today’s visit. It’s intuitive and easy to use. It knows what time it is too, so you can’t order breakfast at dinnertime or vice versa. You tap in your location and table number and order away.

The breakfast menu is large and varied.

I knew in advance what I was going to order: the large Irish breakfast, for €7.45. For an extra €1.70, you can get an infinite number of beverage refills from one of the machines strategically located on the premises. As soon as I had ordered and paid (again through the app) …

… I heard a ding from behind the counter, reassuring me that my food was being prepared.

I took a look around. I was in a vast extension that stretches across the rear of maybe three or four of the original houses. There’s a substantial amount of glass in the roof and on one side of this area, so the space feels airy and light. Beside me I could look down to an outside serving area and at the backs of the original houses, restored to what looks like a high standard.

Behind the bar is this …

… referencing Saint Kevin, the wild boar that he is reputed to have saved from hunters, and his connection with birds and other wildlife.

I mentioned at the beginning that this was not my first Wetherspoons breakfast. Indeed, coming here today was a sort of act of remembrance. I had a friend called Philip who sadly died about 18 months ago. We met in college, lost touch soon afterwards but, due to Phillip’s persistence, reconnected about 10 – 12 years ago. We met reasonably regularly for chat, food, a few drinks, occasionally the cinema, gigs, and sometimes moderately lengthy trips on public transport, of which we were both very fond. Philip was entertaining company. He had eclectic tastes and an exhaustive knowledge about sometimes the most obscure topics.

Philip and I met for breakfast some years ago in the Dun Laoghaire Wetherspoons, a place called the Forty Foot, at the bottom of Marine Road, overlooking the harbour. One of his fantasy retirement scenarios (apart from living in a converted double-decker bus) was taking a permanent room in Keavan’s Port and padding down to the bar in dressing gown and slippers, to eat, and consume beverages, both alcoholic and non-alcoholic. He never got to see the hotel, sadly, but my visit today was done partly in his memory. I miss him.

My breakfast came astonishingly quickly. Here it is:

Wetherspoons is a cheap place to eat and drink. Most pints of beer are under a fiver. A pitcher of cocktail is a tenner. This enormous plate of food, complete with coffee refills, and a 70c discount, was, you’ll remember, €8.45.

It was a good breakfast. Not a great breakfast. But a good one, on its own terms. Everything tasted as it should. The eggs were a little overdone but I’m assuming, given the speed with which the plate arrived at my table, that all the food was pre-prepared and waiting to be served, so I forgive them.

Afterwards, I had a little wander around the ground floor of the hotel. The atrium, where I ate is, as I mentioned, vast but towards the south of the building, the architects utilised what were presumably the original room spaces to make interesting smaller nooks and crannies, offering at least some eaters and drinkers some privacy.

Various photos and framed items tell the history of the area and of the building, with interesting artefacts and artworks giving a flavour of times past.

The foyer of the hotel is lovely, with stained glass details …

… and various historical drawings and plans for church windows.

I took a different route on my cycle home, along the South Circular Road to Rialto and then left, cycling beside the part of the Luas Red Line track that follows the old spur of the Grand Canal that used to lead to a harbour and basin, close to James Street, presumably serving the Brewery.

A pleasant morning of memories, mixed emotions and interesting experiences. With a decent breakfast thrown in.