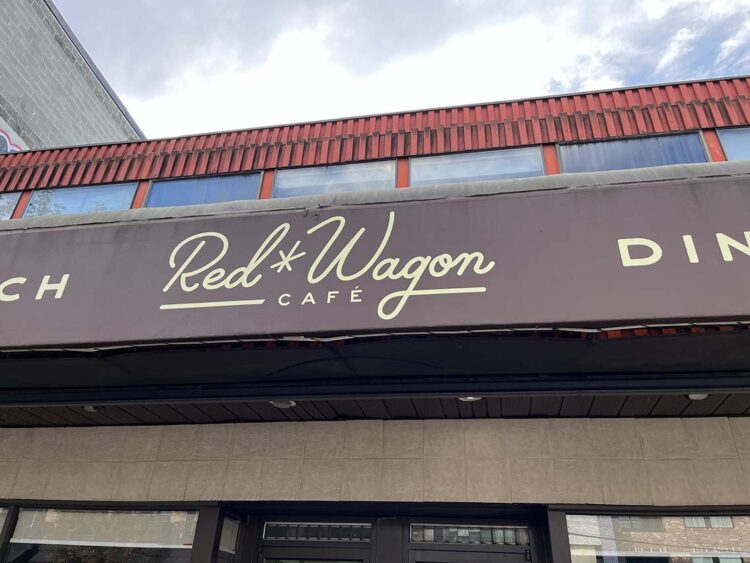 The Red Wagon Café lies at the intersection of Hastings Street East and Lakewood Drive in Vancouver, Canada, close to a clutch of ethnic restaurants.

It’s definitely what you’d recognise as a diner. The Red Wagon on Vancouver’s Hastings Street specialises in brunch and lunch, 9.30am to 2.30pm every day except Christmas Day and Saint Stephen’s day.

It’s located in a double-fronted property with plate glass windows, entrance to which is controlled from outside.

Inside, a counter, cubicles and tables cater for maybe 50 to 60 people. Decor is refreshingly simple with the little red wagon theme dotted around as a reminder.

We were greeted warmly by a young server who introduced herself, showed us to a table, and provided glasses and water.

The menu is accessed via a QR code stuck to the table.

Clicking on the link (go on, click on it – it’ll open in a new tab) brings you to an array of tasty options and extras. The diner’s website notes that where possible, Red Wagon uses fresh local ingredients, buys from small local producers, that they smoke and cure their own meats, and make their sauces from scratch.

The menu (just in case you haven’t clicked already – it’s definitely worth a look) contains about 25 dishes and several extras, plus a small selection of alcoholic and non-alcoholic beverages, including ‘bottomless’ coffee. The variety of offerings takes one on a virtual journey from Canada to Vietnam, to Mexico, the UK, France, the Middle-East and back. Vegetarian and vegan options are available too.

I find it incredibly difficult to get my head around the €/CAD exchange rate but prices here seemed very reasonable, especially viewed in comparison to the extreme gouging we experienced in Canada’s airports.

Reading the menu on a phone took a little getting used to for me, but I soon lit on the Chilaquiles. Frank chose the Super Trucker with extra blueberries, and Maeve the Trucker with avocado. I had forgotten that, in the North American continent, you can’t just order eggs and leave it at that. Your choice gives rise to a range of options. I ordered mine ‘over easy’, mainly because I recognised the phrase from movies. Sad, but true.

The diner wasn’t full by any means, but it was a Monday mid-morning so I wouldn’t have expected a crowd. It has the feel of a neighbourhood-type restaurant, with a local, regular customer base. It has recently relocated but not far from its original spot, so I’d say its clientele followed it. Frank did. On the basis of this brunch, I would have, too.

Food came quickly, the two Trucker plates stacked high, with mine in a deepish bowl. The Trucker plates were dominated by huge, thick, fluffy pancakes. I tasted one. Surprisingly light and absolutely scrumptious. The house fries were fabulous chunks of delicious soft potato. The quantities were such that a take-out box was required for what couldn’t be fitted inside my breakfast companions.

It was fresh tasting, spicy, and surprisingly filling. Something I would definitely eat again.

Coffee and cream kept coming, while servers buzzed around the occupied tables, delivering food, taking away empty plates and engaging in friendly conversation with customers.

The bill for this tasty, filling brunch came to CAD84, including a well-deserved tip.

That’s about €64 but, in this time of global financial upset, trying to compare prices internationally would do your head in. Let’s just say it was well worth it and if I ever return to Vancouver (which I’d like to), I’ll certainly revisit.

A short note on Vancouver …

Vancouver is a very pleasant city set around a large bay, busy with commercial shipping, but also sporting sandy beaches that support a range of water-based sporting activities. Within easy reach (about 40 minutes in a car from Downtown) are mountains which are snow-covered and ski-able from late November to early April. Although the centre is dominated by high rises, the streets feel spacious, and the city generally seems bright and relaxed. It helped, of course, that we were there on a delightfully sunny day. It’s a city with a huge ethnic mix and people seemed genuinely friendly. We were fortunate to be shown around by Frank who has lived there for the last four years and was therefore able to give us both a tour and a commentary on life in the city, its make up, and its amazing amenities.

In common with most large cities, however, Vancouver has a dark side, and this post would be incomplete without mentioning it. Frank drove us east along Hastings Street from Downtown, and quite soon we were confronted with the most unimaginably tragic scene. A short stroll, but a world away, from streets filled with bars, limos, beautiful people and trust-fund boy racers in expensive open-topped cars, lies a grim reminder of the opioid crisis that grips the North American continent.

Pavements covered with ragged tents, ripped tarpaulin held together with duck tape, cardboard shelters, junk and mess, are home to hundreds, maybe thousands, of people living in desperation, sickness, addiction and squalor. Although in an area of a concentration of social services and addiction treatment, the tide of misery is overwhelming.

A toxic combination of Vancouver as a major port (and therefore an import gateway for narcotics), the availability of cheap drugs such as Fentanyl, and what is clearly an inadequate political response to what is, in effect, a humanitarian catastrophe, has left this section of the Vancouver community homeless, hopeless, rootless and prey to drug barons and the probability of an early death. Corralled into a finite area, presumably most people in this vibrant, young city can avoid seeing it and, presumably, also avoid thinking about it.

Coincidentally, I listened to this NYT podcast recently (Vancouver’s Unconventional Approach to its Fentanyl Crisis) on one innovative initiative based in Vancouver, designed to reduce the potential harm from unregulated street drugs, and give addicts the head space to gain control of some aspects of their lives. It’s worth a listen if you have a few minutes.